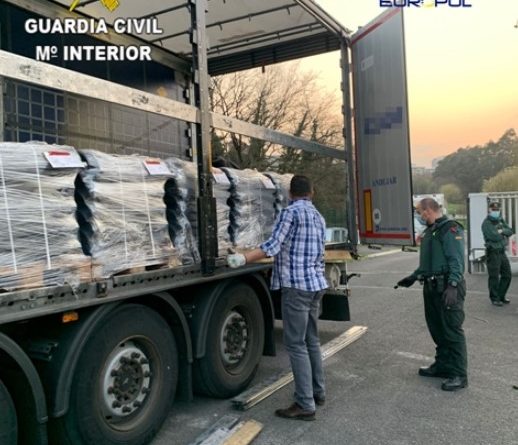 Spanish Civil Guard, within the framework of the TRASMANE operation, has proceeded to the arrest of 15 people and the investigation of another 3, belonging to a criminal dismantling organization that introduced marijuana and hashish in Germany, Holland, Luxembourg and France.

Likewise, 13 searches have been made in the provinces of Malaga, Seville and Cádiz where 280 kilograms of hashish, 500 kilograms of marijuana, 68,000 euros in cash, jewels valued at 400,000 euros, 12 vehicles valued at 850,000 euros, three weapons, 50 telephones and various electronic and computer equipment.

The operation began in April 2020, when the Civil Guard learned of a robbery with intimidation perpetrated in the Sevillian town of Lebrija where three vehicles closed the way to a van of a parcel company, once on the shoulder, they got off several heavily armed individuals taking the vehicle.

Once the Civil Guard was at the scene, the driver of the van claimed to be a German citizen who worked for a well-known transport company. Suspecting the agents for the driver’s version, they proceeded to contact the company which communicates that neither the person nor the vehicle have any kind of relationship with them.

For this reason, the agents began procedures and it is known from information with other European police officers that, a few days before, the driver of the van had been arrested in France, when he was carrying a van, labeled the same as the previous one, when transporting 154 kilograms of marijuana and 30 kilograms of hashish.

As a result of the information obtained and the collaboration of the French and German police, the agents were able to verify that the organization was traveling in different vehicles, especially rental vehicles and labeled the same as those of the well-known logistics companies. Likewise, to transport the drugs, they used a shuttle vehicle to warn of the police presence and another that went behind the characterized van that performed security functions.

In March of this year, investigators detected a truck that left one of the ships that was under surveillance, for which a discreet follow-up was carried out. Finally, he is stopped before leaving Spain at the Irún tollbooth. 280 kilograms of hashish and 65 kilograms of marijuana were found inside the industrial cold machinery that it transports, for which the driver is detained.

Continuing with the investigations, the agents were able to verify that the organization was perfectly organized and hierarchical and led by a German citizen, resident in Puerto de Santa María (Cádiz), and as a lieutenant a citizen of Spanish nationality who was the man of total confidence of the previous one. It was also followed in importance by another person who was in charge of renting vehicles, ships and organizing logistics. The organization also had on its staff the drivers of the vehicles in charge of transport, security and protection personnel, mechanics to make double funds, marijuana producers and those who obtained hashish. 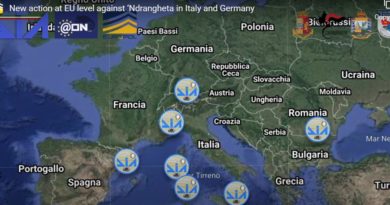 New action at EU level against ‘Ndrangheta in Italy and Germany

AFP seizes 450 kilograms of heroin in largest ever onshore detection