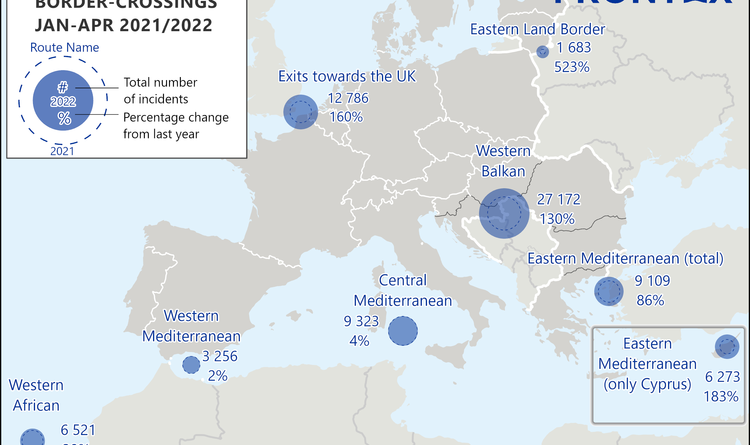 Between January and April, there were about 57 800 irregular entries to the European Union, according to preliminary calculations*. This is 69% more than in the first four months of last year.

Refugees fleeing Ukraine and entering the EU through border crossing points are not part of the figures of illegal entries detected. According to the latest Frontex data, more than 5.9 million people have entered the EU from Ukraine and Moldova since the beginning of invasion in February.

In April, Frontex registered around 15 000 irregular crossings, 79% more than in the same month last year.

At the moment, Frontex has more than 2 000 standing corps officers and staff at various sections of the EU external border, as well as in Albania, Serbia, Montenegro and Moldova.

In the first four months of 2022, the most active migratory routes into the EU were the Western Balkan, Eastern Mediterranean and Central Mediterranean routes.

The Western Balkan route accounted for nearly half of all the illegal border crossings with 27 172 illegal crossings, up by 130% from last year. The main nationalities on this route included Syrians and Afghans.

The number of detections on the Eastern Mediterranean route remained high with 9 109 arrivals (+86%). This was particularly due to the steady number of arrivals to Cyprus, which accounted for more than half of all detections.  Most migrants came from Syria, Nigeria and Congo.

9 300 illegal crossings were registered on the Central Mediterranean route between January and April, roughly 4% more than during the same period in the previous year. The main nationalities represented on this route were Egyptians, Bangladeshi and Tunisians.

On the Eastern land border route, Frontex registered 1683 irregular crossings, over five times more than last year. The main nationalities on this route were nationals of Ukraine, Iraq and Belarus.

The number of irregular migrants seeking to cross the Channel towards the UK using small boats continued to rise in both sides of the Channel:  roughly 12 800 attempts were recorded, which is a 160% increase compared to the same period in 2021. The main nationalities on this route were from Afghanistan, Syria and Iran.

*The figure includes other less active migratory routes not mentioned in this press release. The final figures may be higher due to delayed reporting. 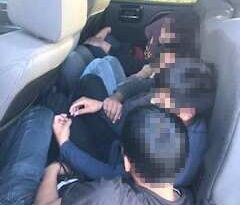 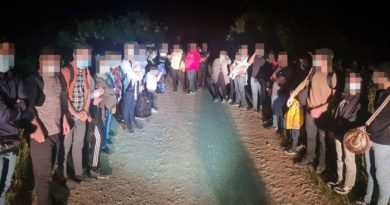 Three More Migrant Groups Detained on the Lithuanian Border with Belarus, a Total of 58 Foreigners 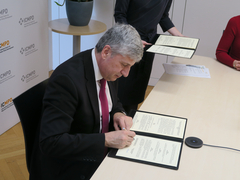 ICMPD signs Seat Agreement with the Republic of Azerbaijan