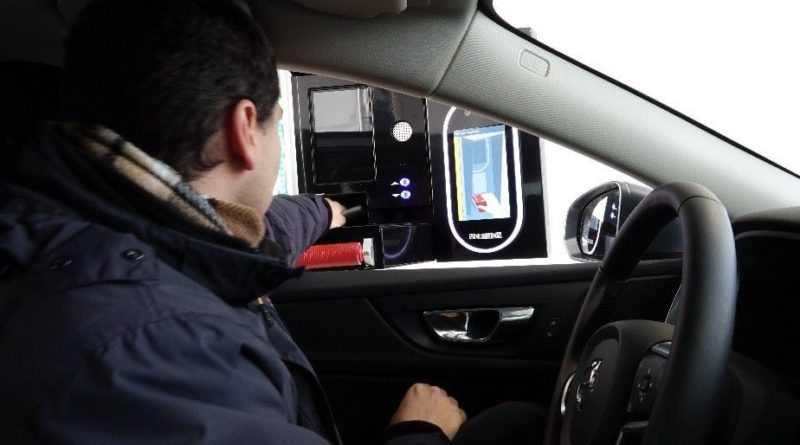 Border control is a major challenge for security and mobility. Travellers request minimum delay and a smooth border crossing, while border guards must fulfil their obligation to secure the borders against illegal immigration, smuggling and other threats. Automated border control (ABC) systems, so-called e-Gates, are common installations especially in airports. First installation of e-Gates was done in the mid-2000s in airports. ABC systems use different modalities to verify the traveller’s identity against the data stored in the passport. Due to the increased number of e-Gates installed at airports, various studies analysing the performance of such systems have been carried out [2,8,5]. In airports, it is common to have multiple groups of 2 to 4 e-Gates installed together. Other advantages are the efficiency in passenger profiling, the enhancement of border security and the satisfaction of passengers [6]. While during a manual control the border guard must check all documents, passenger’s behaviour and appearance, during the automated control the border guard can focus on the passenger while the passenger is traversing the e-Gate. In contrast to already widely accepted e-Gate installations at airports and seaports, only few attempts to implement e- Gates for vehicles at land border controls were reported. The FastPass Hauts-de-France (‘FastPass HdF’) project aims to address border control points where vehicles cross the border, especially at harbours for sea ferries.

A thorough search of the relevant literature yields many results related to Automated Border Control or e-Gates for persons and few related to e-Gates for vehicles. The FastPass EU project was a European Union project funded by the European FP7 program. Its primary goal was to develop a harmonized and modular system for European automatic border crossing (ABC) points. ABC solutions for people crossing the borders at airports or seaports have different names depending on the country where they are installed: Australia (SmartGate), Canada (CANPASS), European Union (e-Gates, FastPass, Easy Go or Parafe Gates), Korea (Smart Entry Service SeS), USA (MPC) and UK (ePassport gates). Regarding border control points where vehicles cross the border, some projects were launched. These projects focus only on a narrow user group (preregistration is required, only certain citizens are eligible, etc.). In the United Arab Emirates, the project ‘Aabar system’ was announced a couple of years ago [1]. The system captures passengers’ information by scanning special e-cards and by radio frequency identification (RFI) enabling card holders to cross borders while they remain sitting inside their vehicles. Card holders enter a designated area where the passenger scans his/her card through a card reader machine. Scanned information and immigration details are sent to the emigration official who checks the information and verifies the passengers’ identities.

After a successful check, the enter/exit is allowed, otherwise the passenger is re-directed to a second checkpoint. Up to our knowledge, no information is available whether the project was finally implemented or not. Also in UAE, a Smart Gate System reports the ability of handling lorries and automatising security functions, such as identification of the driver at the King Abdullah Port [3]. However, no more details can be found describing how the system is implemented. ‘Ready Lanes’ were implemented in the United States of America for people entering the country through a land border [4]. Only travellers holding a special RFI card are eligible to use these lanes. At Hong Kong-Zhuhai-Macau Bridge, Chinese authorities tested diverse biometric modalities to speed up the border crossing [7]. They use high-resolution cameras, thermal-scanning technology, and fingerprint devices to acquire data of Hong Kong drivers travelling to mainland. Using facial imaging, fingerprint matching and car license-plate imaging, acquired data are matched against pre-registered information in the immigration database. Clearance machines automatically rise and descend to the driver’s position; thus, travellers remain sitting in the car.

The Prototype
Two installations at the DFDS terminal in Dunkirk were defined, one e-Gate for cars and light vehicles, and another e-Gate for lorries (see Figure 1). Due to legal restrictions, the prototype was not connected to any installation belonging to official authorities (i.e., police or border control authorities). Demonstrations of the current prototype were shown and explained to regional, national and international delegations including representatives from the Préfecture and the region of Hauts-de-France, French border police as well as DFDS and UK officers.

Installed components
For cars
• Traffic light at entry: To indicate whether the e-Gate is free to use.
• Entry barrier with LED and inductive loop: The barrier controls the entry to the ABC equipment inside the gate.
• An inspection unit with (i) ultrasonic sensor and (ii) automatic terminals. While the former is used for detecting the presence of a car, the latter give instructions to the travellers, provide access to a passport reader and carry the face camera. Both travellers (driver and co-driver) interact with the respective terminal in a self-service manner (Figure 2).
• Exit barrier with LED and inductive loop: It controls the exit from the ABC inspection area.
• CCTV near the exit barrier (left and right): It provides video streams for the e-Gate supervisor workplace helping to recognise if there is one person or two people in the car.
• Mounting frame: This frame is used to mount the inspection unit as well as the additional lights and CCTV cameras.
• Tarpaulin: It provides protection against light, wind, and rain.
• Cement blocks: They are used to keep the installation stable in place without the need of additional ground works. So, the whole e-Gate is easy to deploy, even as temporarily solution.
For lorries
• Terminal with control panel (Passport reader, screen with passenger interface, face camera and additional light).
• Traffic light at exit.
• Cement blocks.

e-Gates
e-Gates for cars
The gate was re-designed to meet the specific requirements at Dunkirk having minimal interference with the existing infrastructure (see Figure 3). The terminal units can read passports of passengers without people having to leave the vehicle (see Figure 4). The checking process runs as follows. The vehicle enters the e-Gate and the back barrier closes behind. Then the terminal units approach the vehicle windows. Due to the terminal units are installed on both sides, the driver and co-driver can be checked simultaneously. Moreover, this configuration allows to check left and right driver cars. After successful identification and positive checks, the terminals move away from the vehicle, the front barrier opens, and the vehicle can pass. In case the identification fails, a message is displayed indicating the passenger(s) has(have) to drive to the manual control which will be done by the border guard in duty.

e-Gates for lorries
The gate for lorries consists of two columns housing the terminals including passport reader and face camera, like the car unit. In case of lorries, the terminals are at a fixed position since lorries have a standard position of the windows. There is one terminal on the left side and another terminal on the right side, so again both drivers left and right can use the e-Gate (see Figure 3). For lorries, the barriers are replaced by traffic lights as it is easier to be recognized by the driver. Finally, the process for lorries is the same as for cars.

Experimental Study
During the evaluation three cars were used and eight people act as driver or co-driver. Cars were driven by different drivers and both sides (i.e., left driver and right driver) were tested. Three different types of passports were tested: EU biometric, EU non-biometric and third country passports. During the evaluation, the functioning and response of the system was checked and tested and the elapsed time by each car inside the e-Gate was recorded. This time was measured as the time spent between stopping and re-starting the car. When a person presents his/her passport, the passport’s data are read, a picture of the person is taken and the whole data are checked. In case of a match, the barrier is opened, and the car can pass. In case of a negative check, a message is displayed indicating to proceed to a manual control. The same output is expected when a person presents a passport of another person (i.e., the data do not match). When two people sit in one car and they present their documents, each person will be analysed separately. In this case, the barrier will be opened if and only if, a positive match occurs for all passengers. Table 1 lists some of the possible configurations and their expected output.

Legal aspects
The legal framework needed for the experimentation was analysed and coordinated with Hauts-de-France. Questions related to civil liability to cover persons and goods (vehicles and devices) were also clarified. Only volunteers took part in the tests who explicitly agree to process their data. Only the technical team (i.e., in total 4 people present during the tests sessions) had access to the platform (application installed on a PC and protected by log-in). No data was transmitted to any external system. At the stage of the experimentation, the system was not connected to any external database.

Results and Discussion
In total, 129 valid measurements were done. Therefore, the trends and correlations reported here can be seen as a small experiment with an acceptable sample size. Considering all 129 measurements, an average time of 48 seconds and a median time equal to 46 seconds were obtained for processing a whole car. The minimum measured time was 27 seconds, while the maximum measured time was almost 2 minutes (113 seconds). These times were only observed in few cases, thus such extreme values can be considered as outliers. Therefore, after filtering such outlier cases, 123 measured times remain (Table 2).
For a real operating system a more systematic evaluation and a comparison against processing times of the manual control are required. However, initial results show the feasibility and applicability of current prototype. It is worth noting the measured times were per vehicle. This means, in many cases two people were simultaneously checked which clearly speeds-up the whole checking process per vehicle and the totally throughput.

Conclusion and Future Work
The ‘FastPass HdF’ prototype is an automated system that aims to address border control points where vehicles cross the border especially at harbours for sea ferries. Two e-Gates for vehicles were installed and tested at the DFDS terminal in Dunkirk. A first evaluation was done that includes experiments simulating vehicles passing the e-Gate and the necessary time taken to pass the e-Gate. Encouraging results were obtained and authorities responsible of the border control process have shown their interest in the prototype. As the President of the Hauts-de-France Region Mr. Xavier Bertrand emphasised: “At a time when the EU and the UK are shaping their future relationship, the ‘FastPass HdF’ experiment using e-Gates for vehicles have provided interesting perspectives and opportunities. The Hauts-de-France regional council worked hard with the leaders of the ‘original’ FastPass EU project, other stakeholders and authorities, to design a smart border that will guarantee security and fluidity for people and goods crossing the border.” To the best of our knowledge, this is the first work that shows how to apply an e-Gate without preregistration for cars and lorries reporting results measured on a real environment. Future work includes a more exhaustive evaluation. Building on the original FastPass EU project, the current prototype can be the next step in the direction of a smart border concept for the region and beyond. 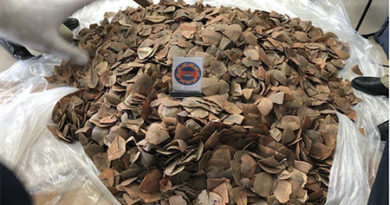 A Secure Visa System for the Schengen Area